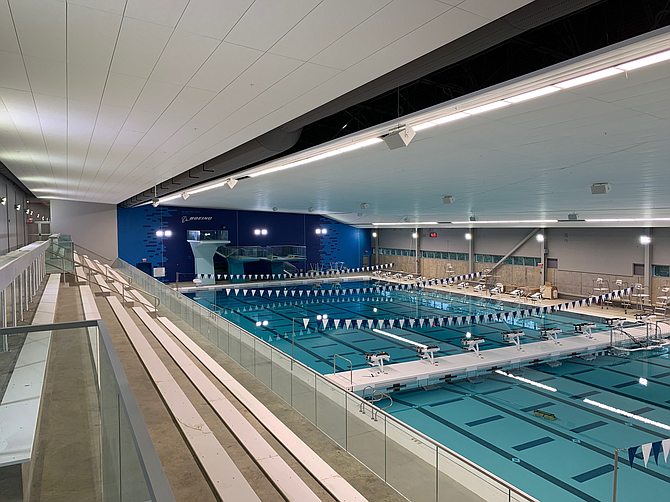 Long Bridge Pool was designed to help with overcrowded swimming pools in high schools, which were only available when school was not in session. It was a major expense for the county, one many opposed. It has 50 meter long swimming lanes, as opposed to the high schools which have 25 meter lanes, among other competition pool add-ons. Photo by Colin O’Donnell, Coakley & Williams Construction

“62% of students across all four grades to which APS provided swim instruction (3, 4, 9, and 10) are non-swimmers. Drowning is the 2nd cause of preventable death of children up to 18 years.”

Arlington taxpayer and swimmer Walt Edwards is angry. “The Arlington Public Schools (APS) Superintendent made a unilateral decision to allow the Arlington Aquatics Club (AAC) to have priority use of two entire APS pools five days a week AFTER Long Bridge Pool opens. This violates the School Board policy and kicks APS programs and swimmers out of two APS pools at prime time for many hours per week.”

Edwards continued: “There was no discussion or consulting with APS Pool users at all. This decision makes me wonder what other School Board policies the Superintendent does not follow. The school board must overturn this decision or admit it has no authority over the school system.”

An Olympian from the Arlington Aquatics Club and Yorktown Varsity program swam in Tokyo, bringing home a silver medal for the U.S. medley relay. The question is whether clubs like the one Torri Huske was in should get priority at local Arlington Public Schools pools even after the Long Bridge Aquatics Center, specifically designed for state-of-the-art competitive swimming practice, opens. The complaints of 22 parents who didn’t want to drive their AAC swimmers the extra distance to Long Bridge seem to have played a role in the APS superintendent’s decision to allow clubs to swim during prime hours at high school pools, thus cramping the lanes for the hours when other Arlington swimmers depend on the pool. Not all of the competitive swim club members are even Arlington residents. This Olympics also included a gold medalist named Lydia Jacoby, who travelled more than two hours to train at Anchorage’s Bartlett High, the only Olympic-sized pool in Alaska.

APS Superintendent Francisco Durán unilaterally made a decision to agree to AAC use of the pools.

“His precedent-setting agreement was made behind closed doors and in disregard of the School Board's own policy M-15 on aquatics facilities and programs,” according to Cynthia Hilton, facilitator of a diverse group of 80 active Arlington swimmers. “Access for community pool users is going to change big time when school resumes because students will be back in the water. Community swim will revert to very early morning hours, and would have resumed around 3 p.m. as soon as high schools adjourned until about 9pm, if the Department of Parks and Recreation planned to move all of its programming to the Long Bridge facility as agreed. But, now DPR is retaining prime space and time in APS pools for Arlington Aquatics Club use because some parents have complained about the difficulty of getting to Long Bridge Pool, a facility that was built with bells and whistles suited for competitive swimming. According to the agreement, the prime after school/early evening full-pool time slots to be given to DPR preclude any other community use. Community members then crowd into remaining slots, swimming sometimes four to a lane. The logistical challenges to getting to the LBP are shifted from the AAC to the general swim community and costs for drop-in swimming will be higher for those residents who swim at LBP.”

Hilton argues the AAC does not represent many youth who swim in Arlington, as postulated by those advocates of using high school slots in the late afternoon. “AAC is not a ‘learn-to-swim’ program. ... AAC participants are, by definition, ‘swimmers,’ having learned these skills in pools, public or private, before they get to AAC. AAC participants are a fraction of all children and youth who stand to benefit from priority access to APS pools. Sixty-two percent of students across all four grades to whom APS provides swim instruction (3, 4, 9, and 10 grades) are non-swimmers. Drowning is the second cause of preventable death in children up to 18 years old.”

DPR has allotted AAC 55 percent more space for practices at LBP than it used at APS. The superintendent’s agreement to allow AAC practices to remain in APS pools would nearly double the space and time available for AAC use, notes Edwards.

Edwards was part of a virtual forum held by the Aquatics Committee on July 20, and attended by 52 residents, with 33 of 36 speakers advocating the DPR-APR agreement be revised.

Many Arlington residents either fought the very expensive (circa $80M) Long Bridge Pool or endorsed it expecting it to spread the load better; now that the money is spent, they want LBP to be a success. This facility doubles public pool water in Arlington. Best scenario: Arlington swimmers will choose to swim at this facility and relieve congestion at APS pools. To launch LBP on the path to success, the plan was that DPR would move all of its programs there. But DPR changed the plan even before the facility had a chance to open, and before it is even known if DPR can fill all the time/space allotted.

Superintendent Francisco Duràn has replied to concerns that he made a premature decision by writing: “Due to its location, Long Bridge Pool is a challenge for some students, families, and community members to access it. As a result, APS and DPR reached an agreement to still provide DPR access to APS aquatic facilities at two schools during a specific time slot. While APS is focused on growing community-based programs at our aquatic facilities, it is equally important we allow equitable access to our aquatic facilities by ensuring programs under the direction of both APS and DPR are accommodated at our facilities.”

Those who oppose the continued use of the school pools by competition teams say Duràn is overlooking some details. A major justification for the revised M-15 School Board policy was that DPR was planning to move all of its programs to Long Bridge when it opened. The Superintendent’s “agreement” ignored the new time/space priority allocation in the M-15 policy. The old allocation put DPR programs ahead of any non-school APS uses.

Edwards does not believe Duràn’s decision supports equity. “The demographics of the AAC is disproportionately white, middle-class kids, some 12 percent or so not from the county at all,” said Edwards. If you want to play in DPR’s competitive youth soccer program, you go to Long Branch soccer fields, Edwards said. Likewise, when the County built the Barcroft facility, if you wanted to be on the DPR gymnastics team, you went to Barcroft. Parents formed car pools, she said.

Before the Superintendent’s decision, the programs that APS was going to put in the vacated space at the pools, in addition to adult lap-swimming and/or fitness, were aimed at attracting children right after school who wouldn’t have the challenge of getting home and returning for lessons.

Both DPR and APS provide discounts for income-challenged individuals. It is part of the APS goal in having pools: teaching young people how to swim.

AAC practices will now displace all of these community use options.

Torri Huske’s father, at the forum, said that denying the high school pool after school to people like his daughter would be discouraging to Arlington youth.

Edwards believes more competitive swimmers like Huske will profit from use of the LBP facility, while beginners will profit from more time at APS schools. “I join in congratulating Torri Huske on her Olympic journey. She should be the first to christen the new Long Bridge competition pool with a victory lap,” Edwards said.

The Aquatics Committee, upon hearing the results of the July 20 forum, asked School Board president Dr. Barbara Kanninen to obtain community input. The Aquatics Committee recommended “putting a pause on the Agreement until the public’s concerns can be heard and addressed.”

Those interested in the issue can weigh in with county, school officials, and the Superintendent of APS, Francisco Duràn.

All of that was expected to go smoothly, until APS Superintendent Francisco Durán unilaterally made a decision to agree to AAC use of the pools.

The M15 policy and policy Implementation procedures direct APS aquatics to recover the costs of community swim. The County has never fully-funded these costs, forcing APS to use “school” funds. The School Board passed a motion in 2020 that told APS to raise more revenue to stop the student subsidy of community swim if the County wouldn’t pay, and APS has authority to offer a variety of programs (classes, lessons, lap swimming) as a way to generate revenue. DPR’s return to APS pools likely displaces APS programs that were going to generate revenue for APS to cover community swim costs in APS pools.